Blockchain systems are rapidly becoming popular in the past few years. This is because they aim to offer a decentralized (or distributed) networking platform for better control.

Furthermore, it strengthens the foundation for data protection so that the maximum benefits of this amazing technology (cloud) can be availed by both – creators plus consumers.

But, the interesting fact is that many of us (including me) aren’t aware of the types of blockchain cryptocurrencies using unknowingly.

The types assertively offer relation with the standardized architecture of blockchain that diversifies the spectrum of layers – network, consensus, replicated state machine, and application – in a much-demystified manner.

Even the potential of such types is beyond our imagination. All of them are solely capable of identifying loopholes (occur intermittently) and proposing solutions associated with them. Such solutions enable these cryptocurrencies (for example ethereum, bitcoin, etc) to use this distributed network technology well and communicate scalably from one peer to the other.

Industries when taking a look at these types thought it is feasible and user-friendly to implement the types of blockchain in the region they are residing or planning to relocate.

Though each of the types differs in terms of benefits and way of working yet it is imperative to know them well.

This is because you may need upgradation in terms of security and confidentiality as per the changing times. And all this is possible if and only if you are well-versed with the ins-and-outs of such terminologies of blockchain.

It is a type of blockchain. This is like an open chain (means anyone can be a part) of its existing network. For instance, there are ten nodes in the blockchain network and you decide to be a part of it. 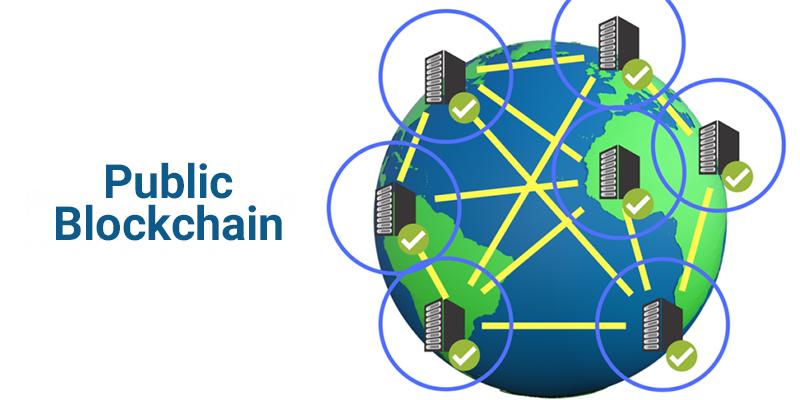 What you can do is join the public network with your own node. This lets the miner (i.e. your node) participate with the connected nodes acquired by developers and other community members having varied designations.

The most interesting part of this type is that all the transactions occurring among the network – either at frequent or regular intervals – are much more plausible because anyone can analyze or make amendments in the protocols of the connected nodes.

Henceforth, it is confirmed that the nature of the network is decentralized since no single node can completely control the recurring transactions – everyone can make amendments simultaneously.

Moreover, this type offers resistance to censorship because no one may shut its network down – the reason being ease-of-access from any location or nationality.

So, the drawback and benefit of joining this network are that every node will get incentives and rewards after joining and using this network – it doesn’t matter whether the node belongs to an entrepreneur or a middle-class person struggling hard to survive in the crucial times.

Many of the times companies think if it is possible to control such a network where the existing nodes work as per their requirements?

Such control is offered – for sure – by this private blockchain. Also, it is called a permission blockchain because if you – for example – wish to join its network. Then, it is mandatory to take permissions from authorities controlling it. Here, you will observe classification based upon right-to-access or edit the protocols of this network.

Also, a consensus mechanism is observed in this network which adds value to every single entity accessing the schemas with much confidentiality.

Normally, the terminology DLT (Distributed Ledger Technology) which is prevalent among masses is used for this framework as the participants and validators both are restricted from accessing the information. Big tech-giants – IBM, Google, and Capgemini – have shown interest in using its protocols.

They are mainly opposite from the framework of the blockchain type mentioned above (a private one). If you talk about consortium blockchain, they are primarily governed by a group of administrators.

A single administrator can assertively not control the whole network and this makes it different from the blockchain preferentially using private network schemas.

Also, this is one of the beneficial types of blockchain if one looks from a business perspective as professionals – like entrepreneurs, CPAs, crypto-specialists, and so on – who decide to reach the number one position in their fields must form alliances.

This alliance making facility is offered by this network only. Even you may also look at it from a perspective that consortium is a sub-entity of the discussed-above (private) network.

Rather, the existing alliances may collaborate in a much efficient and cost-saving manner for discussing the relevant aspects of the business. From those working for banks as managers to the ones spending their precious times for supply-chain management firms, each one of them can be found in the alliances.

This is the last (or final) of the types of blockchain that are popular among the masses. From the word hybrid, it is clear that this will be a combination of private and public blockchain frameworks.

In the hybrid, the node currently using the resources of the cloud can switch from public to private modes as it may access such merits. There is access to the existing frameworks with much freedom but in a controlled manner.

Though new nodes may not establish their existence in the available hybrid blockchain, yet the user (connected with any of the nodes) may enjoy its award-winning functionalities like security, integrity, and transparency.

As usual, the members participating as per the architectural protocols can now scale themselves because it is manageable to examine which transactions may occur in private or which needs to be restricted from participation. Such a unique way of computing resources lets the stakeholders operate in both private and public manner.

Till now, the hybrid concepts used can clearly describe the working methodology of this network. To make it much easier to understand, we must dig a deep-down into the XDC project.

This is the next generation of global computer networks connecting communities and enterprises all around the globe using blockchain technology. Indistinguishably, the network is powered by its needed fuel called Xin-Fin Digital Contract or XDCs.

XinFin is the first of its kind of hybrid network combining the powers and transparencies of a public blockchain with the security and speed of the private network. A permissioned consensus mechanism replaces the wasteable energy-intensive mining making XDC essentially mining free.

If you investigate its working methodology more, you will observe that the network has a public state shared by all members. Additionally, enterprises can host private sub-networks. If you assign the accountability to #enterprise1 and #enterprise 2, each acquires public as well as a private state in their own terms.

The public state transmits the basic information in the presence of a secure and transparent XDC network. On the other hand, the private state can be used to protect sensitive or financial data from the outside world.

This is why the XDC protocol may work as a messaging plus the confirmation layer for domestic and cross-border route payments or the XDC can be used as a payment and settlement layer supported by approved financial institutions. They secure and audit smart contracts, IoT integration.

Notwithstanding, the XDC protocol facilitates real-world contracts and transactions and makes the interpole business communications worry-free with utmost privacy.

In this manner, XDC inherits the features of blockchain so that each modification may occur with much resilience. Even the observations recorded at every transaction follows consensus (the majority of the existing nodes).

The scarcity of resources won’t affect the protocols much as the number of transactions processed among the network has less throughput at an instance. All this collectively maintains the reputation and eliminates the redundancy that may impact the results in real-time.

Can I use any of the types of blockchain aforementioned?

The types of blockchain used by the existing companies or cryptocurrencies (like Bitcoin, Ethereum, etc) are solely capable of estimating the complexities and computing solutions. Such solutions can let the nodes communicate effectively so that the top-notch companies may collaborate in peak seasons with the utmost efficiency and scalability.

Moreover, the blockchain networks discussed – public, private, consortium, and hybrid – have their own merits and demerits. This is because you can use them either in centralized or decentralized frameworks with or without applying restrictions onto the existing peers. It is good to have a choice regarding the selection from any of them, but it must only be made after preparing a to-do checklist. This type of list will contain your requirements and goals that need to be achieved in restricted time intervals.

Hence, to achieve them, you will select the network having the potential to fulfill your requirements. This sort of decision can be a game-changer – either benefit you with the availability of nodes or decrease the efficiency. Furthermore, the architecture used by the variety of blockchain networks offers a platform onto which verified crypto-transactions can be performed along with a strategized computation of resources so that a necessary contribution can be made without thinking twice.

Author Bio: As a content strategist and writer associated with Sagenext, I do more than just stringing letters together into words. My core competency lies in producing useful and amazing content related to technology trends, business, cloud computing, Quickbooks hosting, and finance.